For a couple of months I have been involved in what looked like a  basic excavation project, namely the trial excavation of a late stone-age site in Misskärr, Västanfjärd SW Finland. The project which in part was supposed to be financed by the local community was going as planned until today when the landowner simply said NO. After a very polite discussion we closed the book but sometimes I can´t help feeling bad about the fears landowners have towards archaeologists. In this case the landowner was afraid that the excavations might stop with the plans of building wind turbines in the area, the building of which he supported. So now it´s bye bye Misskärr but instead welcome Galtarby VI.

The Galtarby VI site in Västanfjärd (marked with blue arrow)

Galtarby VI was found by amateur archaeologist Hans Myhrman in 1991 but for some reason never reported properly. The finds consisted of quite a large amount of quartz and slate flakes from one small trial pit at an an elevation of about 20 m. asl. The location of the site  close to a lake or a stream could point to occupation during the late stone-age or more probably the early bronze age (ca 1200 B.C.). The best thing about the site is that it appears to be almost totally preserved.

I called the landowner today and he was very supportive and interested in the project so now it´s time to move forward and and apply for an excavation permit from the National Board of Antiquities. I feel very happy for the locals and especially the local schoolchildren which I would like to be part of the project. 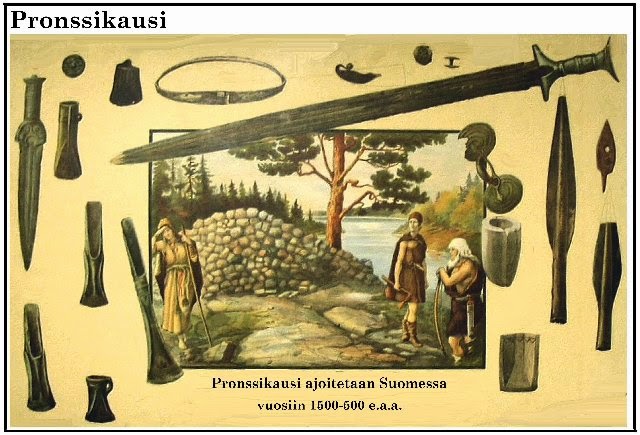 Picture showing bronze age finds and life in the bronze age (used in Finnish schools ca 1930-1960 and later). The bronze dagger in the upper left hand corner is found in the area of Dragsfjärd near Galtarby.