My fathers birthday was a blast but now it´s back to the books and writing the articles one about the stone age anthropomorphic clay figurine from Vantaa and another one about the excavations at Herttoniemi manor. I´m trying to incorporate cultural history in the latter one, something about the archaeology food and glaced red earthenware of the mid 18th century based on the excavation finds from 2005-2007. Anyone with hints regarding to good litterature about this topic? :) 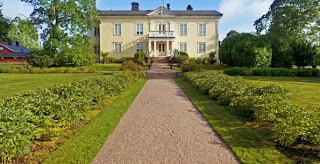 Picture of Herttoniemi Manor in which a ceramic factory was situated in the mid to late 18th century. The refuse was dumped on the backyard (this side) and proved to be a real treasure trove during the excavations.
Lähettänyt JFArchaeology klo 18:34