Day one at the National Museum of Finland

Today I attended the annual meeting of the Finnish archaeologists at the National Museum. Lot´s of familiar faces but also some new ones. The day started off with the presentation of SALAVA and even though it´s been under work for a couple of years it still remains something of a mystery. The idea of getting some common rules (or maybe guidelines?) for Finnish archaeologists working in the field is of course something worth supporting. But I felt that the task of doing this may be a lot harder than previously thought or at least the goals must be set a couple of years forward.

After a nice light lunch with colleagues Simo Vanhatalo and Esa Suominen it was finally time for the presentation of excavation results from the 2012 field season. I was especially happy about three presentations.

Jenni Lucenius from Ålands museibyrå spoke about the recent archaeological field work at the Västra Jansmyra site in the Åland islands and the interesting situation which has arisen with new laws giving landowners a possibility argue that prehistoric remains found by archaeologists on their land are not archaeological sites!!! Here´s a link to an article about the dispute that goes to court later this spring: 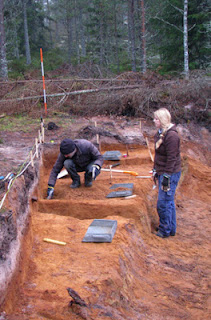 Excavations in progress at Västra Jansmyra

The pace built up with Sami Viljamaa and his survey work in northernmost Finland. Sami is  very experienced in moving in the northern wilderness and told us about his search for new archaeological remains which made him travel about 500+ kilometers on foot in 3 weeks, with a 30-40 kg backpack (he was dropped into the wilderness by helicopter!). 99 new sites were added to the map as aresearch of his amazing work :). Here´s a link: 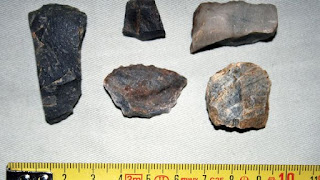 Some stoneage finds from Sami´s survey in Northern Finland.

Petri Halinen from the university of Helsinki spoke of the archaeological excavations at Brunaberget in Vantaa S. Finland. The site is a mesolithic dwelling site found in 1994 by my good friend amateur archaeologists Markus Jauhiainen and inspected by me and him one beautiful summers day that same year while we were excavating in Jokiniemi nearby. It was especially nice to hear that the site has yielded many finds and that it had been used for educational purposes by the University of Helsinki :). 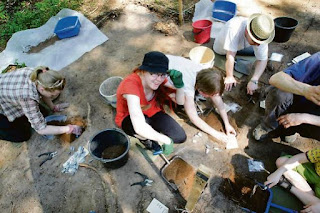 After an interesting day the archaeologists headed for a couple of beers at Irish pub Molly Malone´s . Great tradition which I didn´t attend this year thus avoiding the also traditional hangover of day two of the presentations ;).
Lähettänyt JFArchaeology klo 19:47