"Last week I once again joined the payroll of the Finnish Heritage Agency, but this time the work was something entirely different. Instead of traveling around the country like last year, I'm stationed in the municipality of Savukoski for two months. By opening twelve excavation trenches around the far eastern parts of the Finnish Lapland, we're hoping to get a glimpse into the life of the first humans who set their foot in Lapland more than 10,000 years ago. 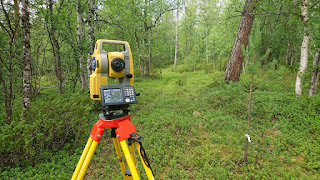 Savukoski is one of the cradles of early human habitation in Finland and one would think that any archaeologist would be eager to be the one to research it. However, due to the relatively isolated location of the potential sites and lack of funding for archaeological research, the sites have seen very little research and all finds from the area are from field surveys. Thus, our excavation has a plenty of potential to shed light into the distant past of the whole Northern Finland.

Twelve sites that we're planning to excavate include dwelling sites and trapping pits from various periods of Stone Age. The oldest site of the bunch is called "Malmio 1", which has been dated to 8,070 BC, making it the second oldest known archaeological site in the whole Lapland. While all of the sites are interesting in one way or another, it was obvious from the start that Malmio 1 was the one that everyone was the most curious about. 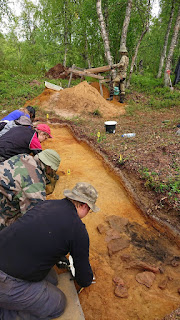 As I'm participating the excavation as an Assistant Researcher, my role is to document rather than to excavate. Thus, I spent my first week mostly with a total station. Together with my colleague, we prepared site after another for excavations. This included setting known points for coordinate measurement, measuring changes in elevation of the excavation areas and drawing maps of surroundings. After we were done with the preparations, we were soon busy with measuring the exact coordinates and depth of each find.

While it often takes a while before an excavation hits into the cultural layers, the trenches we opened showed a plenty of potential from early on. Along with multiple quartz flakes, the finds from the first week included pottery, animal bones and even a part of a flint arrowhead. One of the placements of test trenches hit a jackpot from early on as it included even a whole fireplace.

The only disappointment of the week was the fact that the Malmio 1 site had been partially destroyed by earlier land use and a lot of ground had been piled on top of the cultural layers. However, not all hope was lost and my goal for the following week is to see what truly lies beneath the destroyed layers. More on that next week!"