Today I received confirmation that "Aktia-Stiftelsen i Hangö" has granted our project a quite substantial amount of money for the 2016 conflict archaeology research of  "Deutsches Lager Hanko 1942-1944". 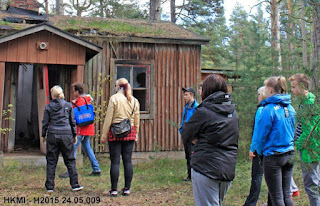 Visits to the German camp with students from local schools since 2014.

Aktia has been supporting our work since 2015 but this time the money arrived at a very crucial stage of the project,with the first publications, the extended large community archaeology digs of the German WW2 transition camp and of course the opening up of the area and guided tours for local  as well as foreign visitors.

Guided tours with "Hanko oppaat" from the summer of 2016.

At the moment I feel both relieved and excited at the same time. Thank You to all in Hanko who believed in the project, participated in the excavations and helped me since that first day in April 2014.