Metal detectorists in Finland have reported a number of interesting finds during the last year. The media and also this blog have covered  the finds of a gold ring in Espoo, a bronze-age axe in Kemiö and the iron age grave with two swords from Janakkala. The news of the great finds  have skyrocketed the number of people who are into metal detecting in Finland.

Sadly I just received this bad news from Turku. I hope that the National Board of Antiquities ore someone else with authority would start coordinating the work with the people who are into this hobby. It is not only a matter of protecting the prehistoric and historic sites but also a question about where to find the money to pay for the multitude of items sent in by the enthusiasts  in hope of a fast cash reward for valuable finds.

I hope that the media would cover the subject with care and talk less about the cash value of the finds and instead focus on the possibilities of serious co-operation between the people into metal detecting and professional archaeologists. I see metal detecting as a great opportunity for archaeology but also as a great threat if it´s just treasure hunting for cash (although reported to authorities). The example below isn´t either, it is  simply criminal. 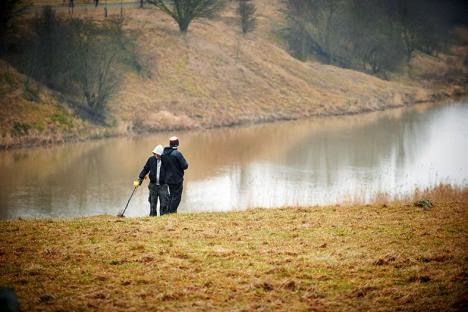