Finally, tomorrow, at least something happening on the "Hanko 1941" front when me and Mr Lasse Nyman will kick off the first leg of the painstaking work of documenting the area of the former WW2 Prisoner of War Camp number 7 (Sova 7) located in Raseborg S. Finland. 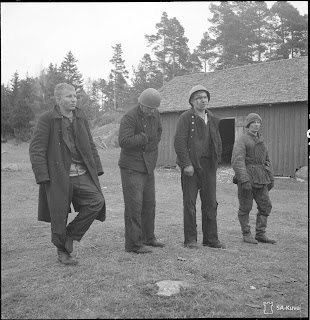 Soviet prisoners of war captured on the Hanko-front before beeing moved to a prisoner of war camp. Photo from 1941. SA-kuva.
After this we will visit Kek 18 or the site of the former evacuation center (morgue) of fallen Scandinavian and Finnish soldiers on the Hanko Front. The building which so much tragic history was demolished in the 1990´s but otherwise the area is very much as it was in 1941. 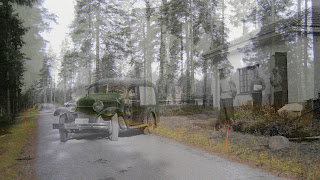 Kek 18. The body of the fallen Danish volunteer Jörgen Hagemann is lifted into the awaiting car. Now and then photo Jan Fast/SA-kuva.
Last but not least we will inspect and document a recently found cairn in Raseborg. This may even be an iron- or bronze-age grave but let´s see.
Lähettänyt JFArchaeology klo 13:40