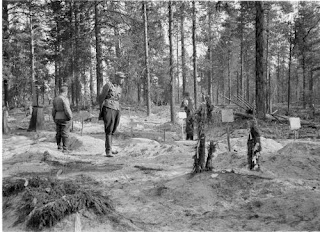 "DNA in human skeletal remains represents an important historical source of host genomic information and potentially of infecting viruses. However, little is known about viral persistence in bone. We searched ca. 70-year-old long bones of putative Finnish casualties from World War II for parvovirus B19 (B19V) DNA, and found a remarkable prevalence of 45%. The viral sequences were exclusively of genotypes 2 (n = 41), which disappeared from circulation in 1970´s, or genotype 3 (n = 2), which has never been reported in Northern Europe. Based on mitochondrial and Y-chromosome profiling, the two individuals carrying B19V genotype 3 were likely from the Soviet Red Army. The most recent common ancestor for all genotypes was estimated at early 1800s. This work demonstrates the forms of B19V that circulated in the first half of the 20th century and provides the first evidence of the suitability of bone for exploration of DNA viruses.

The bones had remained in the battlefields of Karelia district, near the border of Finland and Russia at the time of WWII. The climate in this region comprises four divergent seasons, with sub-zero temperatures and snow-cover during winter and long day lengths (≤20 hrs) during summer. The soil is generally acidic, with regional and micro-scale variations. The remains were initially considered Finnish in origin based on visual inspection of vestiges of military uniforms, ID tags or personal belongings1 under the coordination of the Association for Cherishing the Memory of the Dead of the War. DNA extracts of altogether 106 bone samples from WWII casualties were obtained from the Department of Forensic Medicine, University of Helsinki."