The "Janakkala Swordsman" has now been put on display at Vapriikki!

In 2014 a group of metal detectorists exploring an area in southern Finland stumbled upon the burial plot of a fascinating ancient figure. The extraordinarily well-preserved skeleton was found buried with different swords one fromthe viking age and the other one from the Crusade Period (ca 1100 AD), perhaps to aid him as he journeyed into the afterlife, 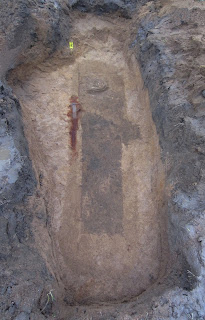 The newly found grave of the Janakkala swordsman in 2014. Photo the National Board of Antiquities.

“There were two swords, one on top of the other, the smaller of which was a Viking-era artifact,” NBA researcher Simo Vanhatalo told YLE. “There is now speculation that it may have been in a fire. In other words, it may have been an heirloom that was in a cremation fire. So that’s a rare combination. It’s one of the longest swords ever found in Finland”.

A couple of days ago the skeletal remains along with the conserved finds from the grave were put on display at the Vapriikki Museum in Tampere, Finland. We are of course still waiting for the scientific publication of the find but this is a good start! Please visit Tampere this summer, Finland and experience the magnificient "Birkkala 1017 AD" exhibition!! 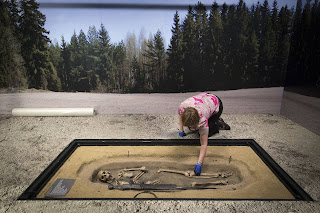