In search of the "Lottas" of the "Kantine Erika"

One would imagine it is easy to find traces of Lotta-Svärd activities in this remote and secluded area of the German transition camp but, as a matter of fact, it isn´t and this it what makes the search so interesting!

There were only a handfull of Finnish women running "Lotta Kantine Erika", a small  building just 6x6m:s in diameter, in the easternmost part of the "Durchgangslager" which was a daily temporary home for almost 4000 German soldiers stuck "In Transit" between home an the "Nordfront" between 1942 and 1944. 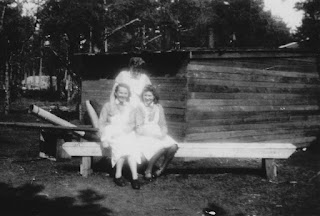 Three "Lottas" outside the cooking shelter of "Durchgangslager Hanko" in the summer of 1942 during the early construction phase of the large German transition camp.

We have tried to find the exact spot of the "Lotta Kantine" since the start of the project in 2014 but without success. Several finds point towards the prescence of many German soldiers in the area but we have found close to nothing that can be connected to the women (Finnish or German) working or stationed in the camp. 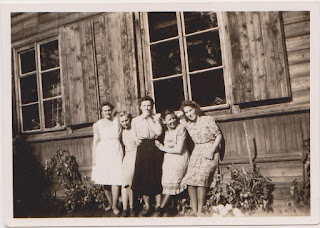 Here are some pictures of a few of todays finds. An interesting dump site found close to the easternmost corner of one of the large barracks in the area might however provide a clue. This dump is situated just some 40 m:s from the area of the "Erika". 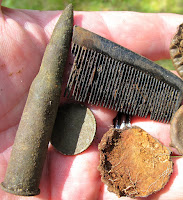