Excavating a possible dump of the Finnish SS Batallion

Finally we are as close as we can possibly get to the life of the Finnish SS men and the women from the Lotta Svärd organisation in "Durchgangslager Hanko". Two large dumps have now been discovered very close to the placWee of the "Baracke" were men from the Finnish SS Bataillon were housed in June and July of 1943. Today the exact spot of the "Lotta Kantine Erika" was finally discovered. We will start excavating both areas tomorrow morning!

We have been searching for the place of "Lotta Kantine Erika" since the start of the project in the spring of 2014. Finally it was not the finds that rather the lack of them that resulted in us managing to locate the excact spot were the "Kantine" once stood. Littered all around the cantine we found hundreds of beer bottle caps etc, but in the 30 m square (were the Kantine once stood) the floorboards had prevented finds to reach the ground level. 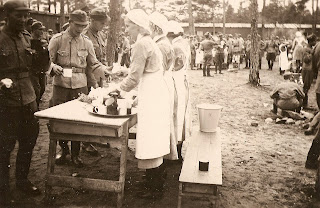 Finnish SS men after having changed to Finnish uniforms in "Durchgangslager Hanko" in 1943.

One theme of this years excavation of "Durchgangslager Hanko" was to try to find archaeological finds that relate to the prescence of the Finnish Waffen SS Bataillons time in the German tranistion camp. Yesterday one untouhed WW2 dump was found very close to the "Baracke" occupied by the Finnish SS men in July 1943 and tday another one! We will start excavations here tomorow morning! 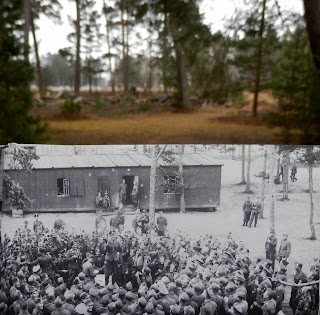 The "Baracke" that was used by the men from the Finnish SS bataillon in July 1943. Two previously undiscovered dumps were found yesterday and today near the easternmost corner of this building that collapsed in the 1980´s.