During the past months I have been preoccupied with the planning of the upcoming WW2 conflict archaeology exhibition in Hanko s. Finland. The exhibition is scheduled for 19.5.2018-31.3.2019. 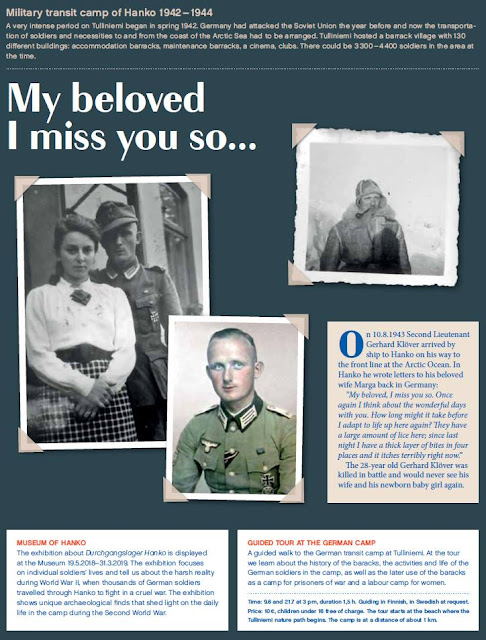 The exhibition will give an insight in the daily personal lives of German soldiers in Finland during the Second World War with a focus on the "Urlaubsfahrt" an integral part of he logistics of the German war effort and the role of the large German transition camp situated on Cape Tulliniemi between 1942 and 1944.

The exhibition shows intriguing unique finds from the conflict archaeology excavations of the camp between 2014-2017 as well as previously unseen period pictures take by German soldiers during the "Urlaubsfahrt"in Hanko as well as the frontlines of the "Nordfront". Photographic art by Jan Kaila and Japo Knuutila from the "Poetic Archaeology" project (2014-2017) add a dramatic artististic dimension to the museum exhibition.

The exhibition also shows lots of genuine German soldiers personal Hanko and Finland related items. These items have been gathered from collections and from German veterans families from all around Europe between 2014 and 2018.